Gaby and Joe Mileti were living in their dream house – an English Tudor in New Rochelle, New York — that they thought they would live in forever. It was the type of residence they pictured their two young children growing up in.

That is, until they received some devastating news six and a half years ago that changed their lives forever. 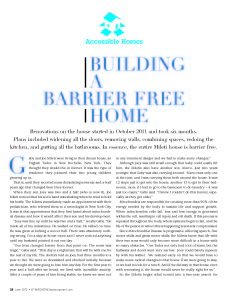 When their son Joey was two and a half (he’s now 8), Joe Mileti noticed that his son’s hand was shaking when he tried to hold his bottle. The Miletis immediately made an appointment with their pediatrician, who referred them to a neurologist in New York City. It was at that appointment that they first heard about mitochondrial disease and how it would affect their son and his development. [Mitochondria are responsible for creating more than 90% of the energy needed by the body to sustain life and support growth. When mitochondria cells fail, less and less energy is generated within the cell, resulting in cell injury and cell death. If this process is repeated throughout the body, whole systems begin to fail, and the life of the person in whom this is happening is severely compromised.]

“Joey was fine up until he was two and a half,” recalls Gaby. “He made all of his milestones. He walked on time. He talked on time. He was great at kicking a soccer ball. There was absolutely nothing wrong. I’m a stay-at-home mom and I never noticed anything until my husband pointed it out one day.

“Our lives changed forever from that point on. The news was tragic,” Gaby said. “That day is a nightmare that will be with me for the rest of my life. The doctors told us Joey had three months to a year to live. We were so devastated and shocked initially because we thought we were going to lose him any day. For the first year to year and a half after we heard, we lived with incredible anxiety. After a couple of years of him being stable, we knew we were not in any imminent danger and we had to make some changes.”

Although Joey was still small enough that Gaby could easily lift him, the Miletis also have another son, Marco, just two years younger, that Gaby was also carrying around. “Marco was only one at the time, and I was carrying them both around the house. It was 12 steps just to get into the house, another 13 to get to their bedrooms, more if I had to go to the basement to do laundry – it was just too many,” Gaby said. “I knew I couldn’t do this forever, especially as they got older.”

Since Mitochondrial Disease is progressive, affecting speech, fine motor skills and gross motor skills, the Miletis knew that life with their two sons would only become more difficult in a house with so many obstacles. “Our Tudor not only had a lot of stairs, but the hallways and doors were very narrow– Joey could barely squeeze by with his walker. We realized early on that we would have to make some radical changes to that house if we were going to stay, or we had to look for a ranch. And if we did stay in that house, even with renovating it, the house would never be really right for us.”

So the Miletis began what turned into a two-year search for either property on which to build a house from scratch, or a ranch they could renovate. They also began their search for an architect who could help them achieve their goal.

“It’s a long, complicated process. It’s not only finding a ranch we could renovate, but finding one with minimal stairs upon entry and one on a flat piece of property. The last thing we needed was a ranch on a hill with a child in a wheelchair,” Gaby said.

As far as the architect, Gaby said her sister put her in touch with a family in her area who has a special needs son, who then referred the Miletis to Adaptive Architecture, as they themselves had used the firm’s services to design a special needs home. As it turned out, Gaby had gone to school with the father, so she knew he had done his homework when it came to choosing an architect. Gaby said that while they interviewed numerous architects, it wasn’t until they met with the principle of Adaptive Architecture, Todd Rosenblum, that they knew they had found the right match.

“There are not too many special needs architects and initially I wasn’t specifically looking for one,” she said. “I just found Todd Rosenblum to be the most genuine and honest. He talked to us about our options of staying in the tudor and renovating, or looking elsewhere. That’s when we came to the realization that we had to sell our house and look for something else.”

Gaby said that they looked at hundreds of houses, knowing that the most important thing was to find a house that would work for her so she didn’t have to do so much lifting, and for Joey so he had easy access to every room.

The Miletis initially put in an offer on a piece of land so they could build from scratch, but they never heard back from the seller and decided to purchase a ranch to renovate instead. The 1965 ranch they found needed an extensive amount of updating and renovating, but Rosenblum told the Miletis that the house’s overall structure was one that he could work with.

Renovations on the house started in October 2011 and took six months. Gaby said Adaptive Architecture’s plans included widening all the doors, removing walls, combining spaces, redoing the kitchen, and gutting all the bathrooms. In essence, the entire Mileti house is barrier free.

Gaby said Joey is ambulatory, sometimes using a walker, and other times just maneuvering his body to get from point A to point B. “He wants to get around on his own and the beauty of this house is that he can,” she said. “He roams the entire house, which is something he couldn’t do in the old house.

She said her and Joe’s biggest concerns were ensuring the house did not in any way resemble a hospital or have a sterile feeling. What were the kitchen, dining room and family room are now one large great room. The two support columns were designed to look like architectural elements, and the bathrooms are what Gaby calls “magnificent.”

“By opening up the house, it enables me to see and hear the kids at all times. That was crucial for their safety,” Gaby said. “It was critical in the design and layout, and in our meetings, I made that very clear to Todd. He understood where I was coming from, and went beyond our expectations.”

Since the two boys share a bathroom, the Miletis wanted to make sure that it has all the features Joey requires, while still allowing Marco to feel like the space is also his. It was designed specifically to meet Joey’s current and future needs – with a roll under sink, extra wide doors, open floor space, roll in shower with built in bench, decorative grab bars, anti-scald thermostats, and multiple shower heads.

“The bathroom for the boys is absolutely gorgeous. You would never know it’s ADA compliant. It’s very contemporary—similar to what you’d see in Europe,” she said. “We wanted to give Joey a bathroom that would make him more independent and be easier for me when I have to be in there with him. We basically ripped out a 1965 purple bathroom and replaced it with a modern, sleek universal design that Adaptive Architecture created.”

In order to deal with the five steps into the house from the garage, Adaptive Architecture incorporated a platform lift that Joey can use when he needs. The lift is located in a way that allows the Miletis to still park their car in the garage, keeping everyone – and the lift — away from inclement weather as they assist Joey in and out of the house.

Now that the project is complete, and the Miletis have settled into their new home, Gaby said she is glad that they were able to find an architect that specializes in accessible home designs. “If we had used a regular architect, I’m sure he would have been able to come up with the kitchen design, but the bathrooms and all the other unique aspects of a barrier free home can be quite challenging,” she said. “I don’t think just any architect would have nailed it. There’s a lot you need to know and if you don’t use someone who specializes in this area, you might not get what you really need. Todd was able to give us suggestions that we would not have received from just any architect.

“If I had to do this all over again, I would only use an architect who specializes in universal design because they know the ins and outs of what is needed for a special needs family. For example, Todd recommended that we install the structural support for a ceiling track system in Joey’s bathroom in case we should need the lift down the road. I hope we never need it, but if we do, it will be easy to install. I don’t think a typical architect would have thought of something like that,” Gaby said.

Gaby said that no matter what road a family takes to create an accessible home – starting from scratch or renovating an existing home – it’s most important to focus on aspects that will make the home visually appealing, while at the same time, meet the needs of both the disabled person as well as the entire family.

“I would highly recommend a specialty architect like Adaptive Architecture. Todd knew the nuances and all the right formulas to design a house that met our needs now and down the road,” she said. “I’m hoping and praying every day that Joey’s disease slows down, but at least we know we have a totally accessible home that will be here as we need it.”

They just moved in on March 17, and Gaby said it’s still so new—we’re still getting used to it. “We’re creating memories here little by little.”

And how does Joey feel about his new accessible home?

“His speech is very affected by his disease, but I can understand what he says. When Joey said ‘thank you for buying this house’ it was like we hit the lotto. Just hearing those words was amazing. It made all the anxiety of renovating worth it,” Gaby said. “We do the best we can. It’s all day by day.”

The Miletis have started a research fund to help find a cure or treatment for Mitochondrial Disease called The JDM Fund for Mitochondrial Research. The website is www.thejdmfund.org. They can also be found on Facebook at http://www.facebook.com/mobileprotection#!/pages/The-JDM-Fund-for-Mitochondrial-Research/329532960461031.